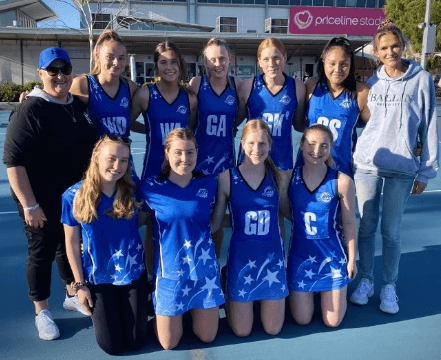 In what has been a year like no other, it was pleasing to finish off with a few weeks of netball before our Summer mid-season break. Unfortunately, we did have to deal with some interruptions to the Summer scheduling thus far; but as we all know health and safety must come first, so we are grateful for the weeks our Jet Stars were able to take the court

I would like to thank our Officials, Players and families for your patience during the lockdown periods, particularly for your willingness to remain flexible and adjust to the various training opportunities and schedules as they resumed.

This year has been challenging for us, without our beloved netball and our Jets Family, so we are particularly grateful to Netball SA, AMND, CND, our Jets Committee and our Coaches for all the hard work they’ve done to ensure our Jets players could return to netball as soon as possible. In saying that, I would like to welcome our new Jets families and players who have
joined us this Summer, and a big welcome to our new Club Coaches as well. Thank you for volunteering your time and efforts towards the development of our girls this season.

Lastly, I would like to express my sincere gratitude to all the past and current sponsors who chose to stay on and support Metro Jets during these tough times. The Club is working very hard to grow, promote and develop our players, Coaches and Officials, and without the help of our sponsors we wouldn’t have the strength we do today.

Enjoy your Christmas break Jetsetters; relax, soak up the sunshine and spend some quality time with your family, friends and loved ones.
We look forward to seeing you all next year, back on court in February, for the second half of the Summer Season and our Winter Trials. Don’t forget to register. Jets Up!

1—WINTER TRIALS
Registrations are now open, and trials will be taking place on the 14th and 21st of February. Go to the Metro Jets website to register!

2—WINTER SEASON LAUNCH
Following trials & team selections, there will be a season launch which
all players are expected to attend. You will meet your coach & team and go through some team exercises!

One thing that has been very pleasing for Metro Jets is that we have still increased in numbers both seasons. Also, during the 2020 Winter season, Jets had some fantastic success with multiple Premierships in Sub Junior 4; Sub Junior 7; and our very first Intermediate 1 Premiership – a brilliant achievement for our young Premier League Club. Congratulations to these teams & their coaches!

PL Squad Update – From The Coach

We have recently completed our Metro Jets Premier League Squad trials and I am delighted to announce a squad of 27 players (plus some young invitees) being selected to participate in the preseason program.

We had planned to have our first official meeting as a squad in mid-November, but unfortunately, we had to postpone this due to the SA lockdown. At this stage, the squad has split up into groups and has commenced their home preseason programs.

The squad will officially commence training together on the 4th of January 2021, with a preseason camp planned for the first week of February. After winter trials, the preseason squad will be reduced to our final playing squad for 2021. We will then be looking to hit the courts in early March prior to the season proper.

I’m pleased to be joined by Julie Wakefield again for season 2021. Julie will be continuing in her role as Premier League Reserves Coach, and we are both looking forward to continuing the development of our young squad.

Personally, it will be my first full preseason with this squad and I’m excited to see the players work on team and individual growth areas. Our focus for the coming season will be on group dynamics, and building on fitness, strength, resilience, work ethic and leadership. These are all standard capabilities that are the expected of anyone in our Jets Premier League program. Jets Up!

The Jets Academy program for emerging talent is underway with our Junior & Sub Junior squads receiving specialised court skills and fitness sessions conducted by our Junior 1 Coach, Jason Delfos (some via Zoom!). The Junior Academy group will be working hard with sessions on Tuesday nights, games on Friday nights and some additional skill & fitness work on Sunday mornings.

Additionally, Jets have continued our partnership with PEAQ Conditioning for our Inter Academy program. Our Inter Academy group train Thursdays & Sundays, as well as playing on Tuesdays! The Club has been impressed by the enthusiasm and dedication shown by the players and we look forward to seeing some push for selection in our top pathway divisions come Winter 2021.

What do you for work/study? I’m about to finish my PhD in Marine Biology and Evolutionary Ecology.

How old were you when you started at Metro Jets? What division did you play? I started playing for Michelangelo (Jets) when I was 6yrs old. I then left the club in 2004 and re-joined as part of the Jets Premier League Reserves squad in 2013 and never looked back. 2020 was my 8th season in our PL Squad.

Why do you play for Metro Jets? The welcoming and family-friendly culture of the club is what enticed me back. I love being able to play for a club that is proud to wear team colours, are always friendly and supportive of each other.

Describe yourself as a player: Quick, hardworking, and level-headed.
Who has been the biggest influence on your netball? Ever since I started playing netball mum and grandma have had a massive influence on my netball. They rarely miss a game, have always believed in me, and continually push me to improve. Besides them, Toni Shannon noticed something in me that previous coaches hadn’t, so I thank her for giving
me my first opportunity.

What is your greatest Jets netball achievement/memory? I have so many great achievements and memories at this club. Being the first Jet to play 50 PL games was a very special moment and a bit of a reward for my hard work and commitment. I’ll also never forget playing in the 2014 Reserves Grand Final.

Other than playing, what else have you been involved in at Metro Jets? I have helped run a few Net Set Go programs, and helped at club clinics and training.

Which teammate is the funniest? I think Chrysta will keep me entertained this season.

Which teammate takes the most selfies? Rhi loves a selfie, @rhiannekaluza for inspo.

Which of your teammates trains the hardest? A few of the more experienced girls like to push themselves, like Lucy, Tessa and Rhi, but I like the way Madi goes about her training, works hard, and gets the job done without complaining.

Something your Coach says? Trudy is a very vocal coach and constantly makes us laugh with her one liners. But come game day, “stay down” or “give” are probably her favourite.

If you were stuck on a deserted island, which three teammates would you take and why? Tamara Killian – Very knowledgeable on health & vitality so she’d keep us alive; Victoria – she should know how to catch fish & feed us; and Chloe has good banter but can also be quiet, so that should make up for all the talking that Tam will do.

Do you have any pre-game rituals superstitions? I used to be terrible with pregame rituals, but I’ve relaxed over the years. I probably shouldn’t admit this, but one season I refused to wash my uniform after a good game, fearing the magic would wash off. Instead, I aired it out on the clothesline, so that mum thought it had been washed… To be fair, that was one of my best seasons yet, and no, I no longer do this. Nowadays, if my teeth are brushed before a game, I’m ready to go.

What do you enjoy most about playing for Metro Jets? We work hard but have a laugh while doing it. I love rocking up to training knowing that I can be myself, work hard and have fun. I love the comradery that comes with playing a team sport, and I have been lucky enough to make some lifelong friends at the Jets. Now I’m excited to hit the court in 2021 and taste some finals success with the girls.

If you were to give some advice to Jets youngsters, what would it be? Work hard for what you want and work even harder to keep it (while still having fun).

We would like to welcome our new Club Coaches—thank you for
volunteering your time and efforts towards the development of our girls this season.

If you are interested in coaching in Winter 2021, please email
secretary@metrojets.com to let us know!

The committee would like to wish all of our Jets families a very happy holiday season! The support we have received from our members during a very interesting year has been amazing, and we are very thankful for the continued support.

We look forward to seeing everyone come back bigger &
better in 2021! Merry Christmas & Happy New Year!